If you have immediate need of our services, we're available for you 24 hours a day.

It is not always possible to pay respects in person, so we hope that this small token will help.

Offer a gift of comfort and beauty to a family suffering from loss.

A gift to your family, sparing them hard decisions at an emotional time.

The year 1953 saw a dream come true. Thomas E. Graves, Jr., along with his wife Mildred O. Graves, began the fulfillment of a dream that had lived with him since the age of ten ------ establishing a funeral home.
"Tom" (as he is known) searched far and wide for a site for his dream. Finally, after many ups and downs, a site was found on Church street in Norfolk, Virginia. Next, he sought the expertise of a friend, the late Herolin Deloatch, who was known for his artistry and skill in design and construction. (he was the builder of L&J Gardens in Virginia Beach, Virginia and many other buildings throughout the Hampton Roads area.)
March 1953 marked the ground breaking for the first funeral home ever designed and built specifically for the purpose of servicing African American families in the Hampton Roads area.
What a job he did in the completing the facility in record time!!!!! On June 15, 1953, open house was held. The public was invited to tour this landmark. For the first time, the African American public was offered a brand new facility to service their loved ones.
Graves Funeral Home offered an air-conditioned building with an office, reception room, prep (morgue) room, showroom, slumber rooms, employee lounge, restrooms and a chapel with a separate family area. Families were offered first class service with professionalism, dignity and affordability. As growth continued, the original building was expanded in 1962.
As growth continued, further expansion was anticipated in the late eighties and early nineties. However, news that the widening of the church street corrider put these plans on hold. Finally, in 1987, it was determined that all widening would be done on the west side of Church street and therefore, our facility would be taken.
Once again, we were faced with a major decision. There was no doubt in our minds we would rebuild, but where? Fortunately, we were able to secure a site adjacent to the old site. Construction began January 1998 with a tentative move in date scheduled for September 14, 1998. Ribbon cutting by Mayor Paul Fraim and the presence of other dignitaries marked the beginning of a new day and once again, Graves Funeral Home was offering you a new building designed especially for your needs.
The new facility houses five individual slumber rooms. Each one is furnished to offer privacy and comfort to families when viewing their loved ones. We have a chapel which seats more than 200 as well as a reception area, a conference room where arrangements are made in privacy, a state of the art showroom, especially designed for Graves Funeral Home, a prep room with a separate holding area, a staff lounge, private office and restroom facilities to service our clients. As in the beginning, our "motto" remains."Your satisfaction is our ambition".
We welcome the opportunity to serve you and your family in your hour of need. We offer you professionalism, dignity and affordability. Graves Funeral Home, incorporated the Graves Family. 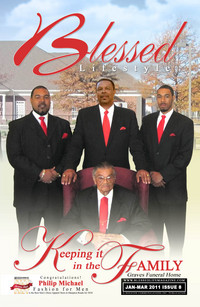 Recently Graves Funeral Home was Featured in the Blessed Life Style Magazine! In this issue Tommy Graves III was interviewed by George Houston; on everything from how the funeral home got started to where we want to be in the future. Please take a few moments to read this article to dive deeper into the History of Graves Funeral Home.

Grieving doesn't always end with the funeral: subscribe to our free daily grief support email program, designed to help you a little bit every day, by filling out the form below.

It's hard to know what to say when someone experiences loss. Our free weekly newsletter provides insights, quotes and messages on how to help during the first year.